20 Last-Minute Pitfalls in Tax Filing You Need to Avoid 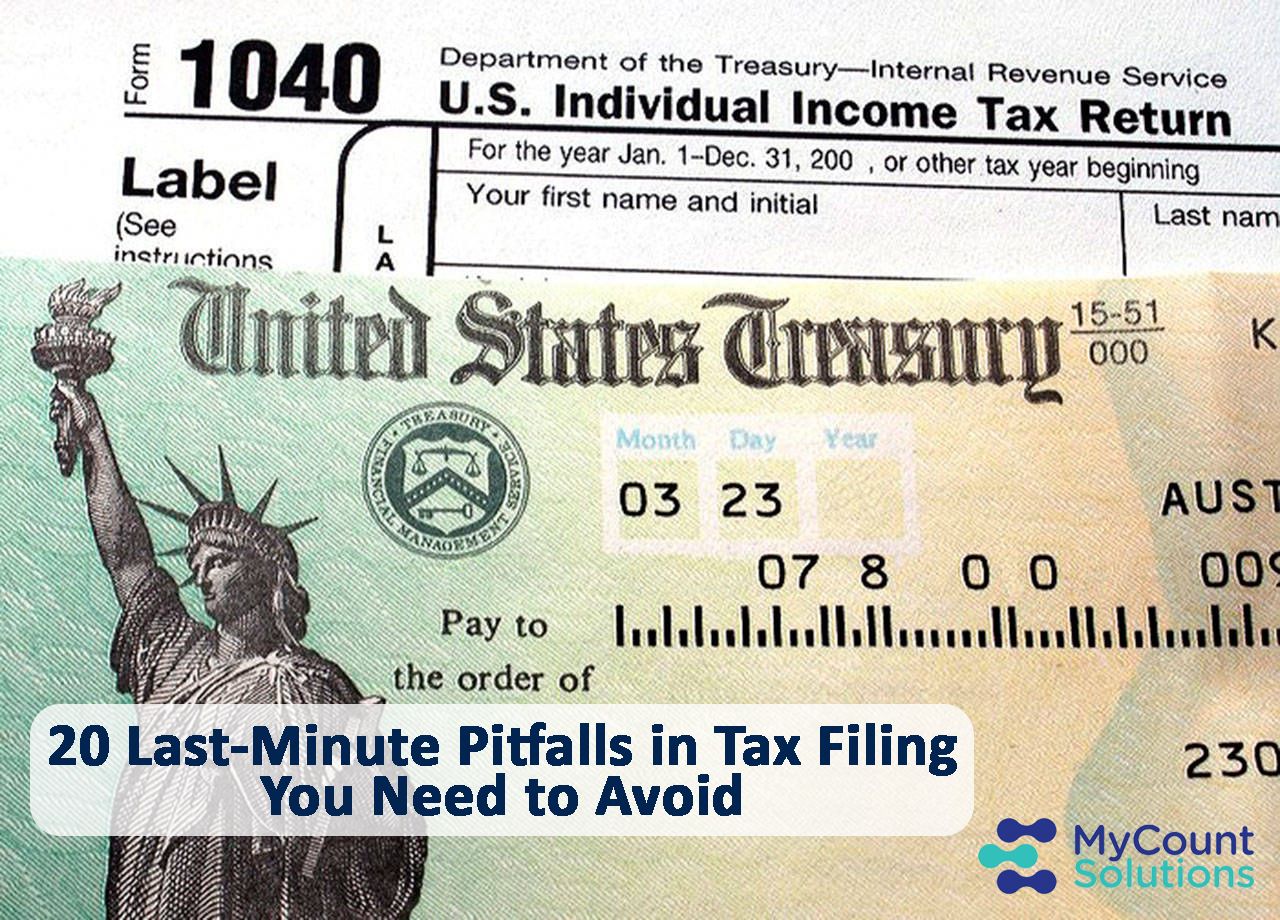 Many businesses and individuals wake up to fulfill their tax duties just one or two weeks before the tax filing deadline. Some people are even more reckless in this regard. They literally go to the last minute in filing taxes. Experts from any tax preparation firm would suggest you take care of your filing in advance in order to avoid that last-minute frenzy that also often results in lost opportunities and penalties. The Internal Revenue Service has even pushed back the deadline to May 17 instead of April 15, keeping in mind the abrupt changes due to Covid-19. IRS has compiled an annual list of errors that are commonly made while tax filing. Electronic filing of taxes reduces errors like misspellings, unsigned forms and incorrect calculation of figures, however accidentally typing the wrong number can also cause errors.

But if you are going to file taxes at the last minute for any unavoidable reason, then read this article because mentioned here are some pitfalls that you should always avoid.

If you are working under the wire and there are still many things left to sort out, then it is better to file for an extension with the IRS instead of filing incomplete and full of errors returns. Such a messed-up situation comes to pass when businesses don’t take care of their bookkeeping in a professional manner. It’s better late than never. You can get any good tax preparation firm onboard after requesting the extension.

If you are working out your tax filing at the last minute, then it would be better to file for standard deduction (if applicable) instead of itemized deductions. In a tight time window, it is not easy to sort out the accumulative itemized deduction that you can avail of. However, if you have taken care of bookkeeping and accounting of your account from the beginning, then you might be able to manage to file for itemized deductions for better benefits.

Work with an experienced tax preparation firm if you can’t decide what type of deduction will be more lucrative in your particular taxation case.

Besides these two important things to take care of while filing tax at the last minute, also remain mindful of these trivial issues.

IRS also says that it is the most common mistake. Even though it’s not usually intentional or entails any mischievous design, it still halts the entire tax return process. Taxpayers are required to sign and date the return, and also have the spouse sign and date if it’s a joint file. Forms that are unsigned and undated are not accepted and are sent back to be signed. You also need to make sure that you are signing on the dotted line in the form.

Leaving off a form W2 or any other relevant document is also a pretty common mistake that people make when they hastily file taxes. If you have more than one job, the IRS requires you to attach an official copy of the W-2 forms. The tax return should include the combined information of wages and withholdings that have been noted on these forms.

1099-R forms are attached to claim pensions, retirement plans, and annuities that have been withheld for a year, or to report funds that the IRA had withdrawn. These funds can function as income that can bump the filers into a higher bracket. If these withdrawals and payments are not reported, it can result in an audit.

It is always a good idea to keep copies of signed tax returns because a lot of loans, like student loans, mortgages, etc. require past tax transaction history.  Filers can get copies if they are missing any, directly from the IRS for $50 each. Having copies of signed returns and records can be useful in times of an auditor in the case a return needs amendment.

This is a common mistake that a lot of people make, even though it is the most obvious thing while filing taxes. Wrong routing numbers and account numbers are one of the common reasons that refunds via direct deposit are delayed for months by the IRS.

If the IRS is owed money, and the filers cannot file electronically, then it is mandatory for them to write a money order or cheque to the United States Treasury, which must include all the personal details like name, address, phone numbers, tax form, tax year and social security numbers. You should also make sure that you provide the correct postage when you file your taxes, otherwise, it might be returned, causing you to miss the deadline.

The IRS office addresses are different for different kinds of tax documents, and specific regions. Sending your documents to the wrong IRS office causes a delay in your refunds and it is one of the most common mistakes made by tax filers.

Arranging your documents in an incorrect order is also an error in a tax filing that can cause your refund to be delayed. You need to make sure that while filing your documents, you maintain the sequence and order of the documents as mentioned.

Taxpayers are required to refer to the 1040 Tax Tables document for the calculation of their taxes on their own. However, referring to the wrong column can lead to miscalculations, and cause errors in tax filing.

If you are over 65 or blind, you are entitled to specific deductions. 1040 or 1040A forms have a chart that is used to determine the correct deduction, and taxpayers often misread these forms, ending up claiming the wrong amount.

Taxpayers need to be mindful when dealing with negative figures. In case of failing to enclose negative numbers in brackets, the IRS misinterprets these figures as positive numbers resulting in additional taxes.

Taxes owed are reduced by tax credits, whereas tax deductions like charitable donations can help in the reduction of taxable income. If there are any miscalculations, it would result in the taxpayer paying extra to the IRS.

One of the easiest and common mistakes is simply entering the income in the wrong box of the IRS form. It is also the most easily avoidable mistake that can help you get the right refunds.

There is certain information required by the IRS in order to provide dependency and spousal exemptions. Taxpayers have to disclose their relationship with the dependant and also mention the amount of support provided in order to benefit from the exemption. In the case of spousal exemptions, age and gross income amounts must be mentioned for both you and your spouse.

Taxpayers often make the mistake of incorrectly stating their filing status which is used for determining eligibility, claims, and deductions as well as fulfills certain filing requirements. The five filing statuses are: single, married filing jointly, married filing separately, head of household, and qualifying widow(er) with dependent child or children.

Another common mistake made by taxpayers is errors in basic addition and subtraction. This can easily be avoided by using software like TaxAct, TurboTax, and TaxCut, which ask about your income and do the math for you. Filing electronically can reduce the risk of errors significantly, also exempting you from the compulsion to include a W-2 form, and signing it. If the taxpayers have an income of less than $58,000, which more than 70% of the taxpayers account for, they can use the free filing software at www.irs.gov/freefile.

Your return cannot be processed if the IRS is unable to read your name, social security number, ID, and address. Thus a common mistake is an illegible penmanship, especially for taxpayers that are not filing electronically.

All the income you have earned is taxable, whether you received a W-2 or 1099 form or not, and even if it is in addition to your paychecks from the regular job. Anything that is earned needs to be reported and should be noted in order to know exactly how much to be claimed.

My Count Solutions with its bookkeeping and tax preparation expertise can help you in getting around all those last-minute tax filing pitfalls.